The title of this piece is Little Henry.  Most of my titles of subjects containing animals, birds or people end up with a name, sometimes named for people who have influenced my life.  It gives me a connection to that painting.  Sometimes when starting a painting a name will come to me immediately as in this painting.  I’ve loved the name Henry for years.   This is a sweet fledgling, having been given its life as summer begins and our season changes into freshness from a dormant winter here in Montana.  Henry needs to be a Little…for more than one reason.

While painting this, close to being finished, I texted a photo to my daughter to share my new art piece.  She commented, Henry, seems shy.  We exchanged text messages back and forth, having fun with the idea that Henry evolved from an earlier conversation.  I am an introvert at heart.  I do not like to speak in front of even a small group, never enjoyed being the center of attention.  Growing up quite shy.  Although, I’ve been able to overcome much of my severe shyness, I still do not like to give a speech or talk to a group.  Much of the turmoil is hidden within so I get feedback such as…oh, you’re not shy, I don’t see you as an introvert or don’t worry you’ll do fine talking, etc.  Really people!  Ugh!  As I want to throw up!

I’ve been invited recently to do a dual show with a talented artist friend.  This show would be in 2016, requiring a lot of finished works to display, an opening reception and, yep, I would have to talk.  Okay, this could hurt!  I visited with my daughter at length about this subject of talking in front of a crowd of interested art lovers.  What kind of questions would they ask, what would I possibly talk about, on and on.   I thought to myself, it is almost a full year away so I have time to prepare myself.

Suddenly, I was noticing all these signs, articles popping up on my facebook page about speaking and overcoming stage fright.  Good grief.  Into the studio I went as painting is like therapy for my soul.  When my daughter proclaimed that Henry looked shy it just shouted…wow…this is my example piece for telling people how emotional connection comes through in my art.  I saw that Henry did seem shy, having been birthed into this world.  It’s a bit scary.  Watching little fledglings bounce around trying to find their wings…that sounds kind of like me!  Henry needs to be Little Henry to give me courage and permission to know that it would be okay, small steps, little steps going forward.  Starting out little and growing.  I’m still not convinced that I can do this but suddenly having worked through some of those emotions with this painting of Little Henry I feel better.  Acknowledging it seemed to allow me to set it aside and not worry so much about it, at least momentarily.  Worry brings no benefit whatsoever in life.

If you are one that can speak openly with confidence, you are so admired by this little fledgling!

Completed the Merry Moose….pulled a late night and an early morning as I just could not let this one alone!!  Snowing and cold here so I will be in the studio again today.  Needing to start on two commissioned pieces that will be holiday gifts.  Time to get to work!  Have a warm fuzzy day today everyone!  If you are traveling be safe! 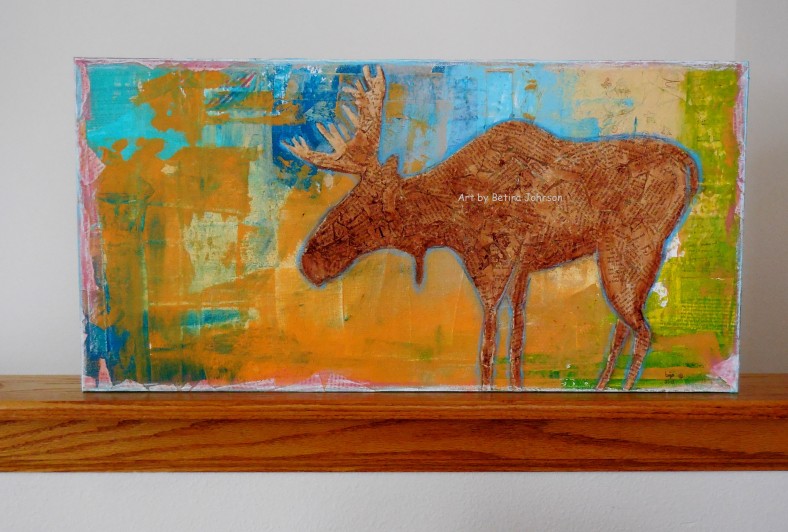 Just completed a new piece I’ve titled Fearless.  This is a 16 x 16 mixed-media art piece created with recycled papers, rusty metal finds as the buttons, acrylics, pen, watercolor pencil and some oil pastels.  All the things I love to work with!!  I am truly fond of this piece because of the bright colors.  I do love color.

Enjoy your Monday everyone.

Expand your courage and release your fears! 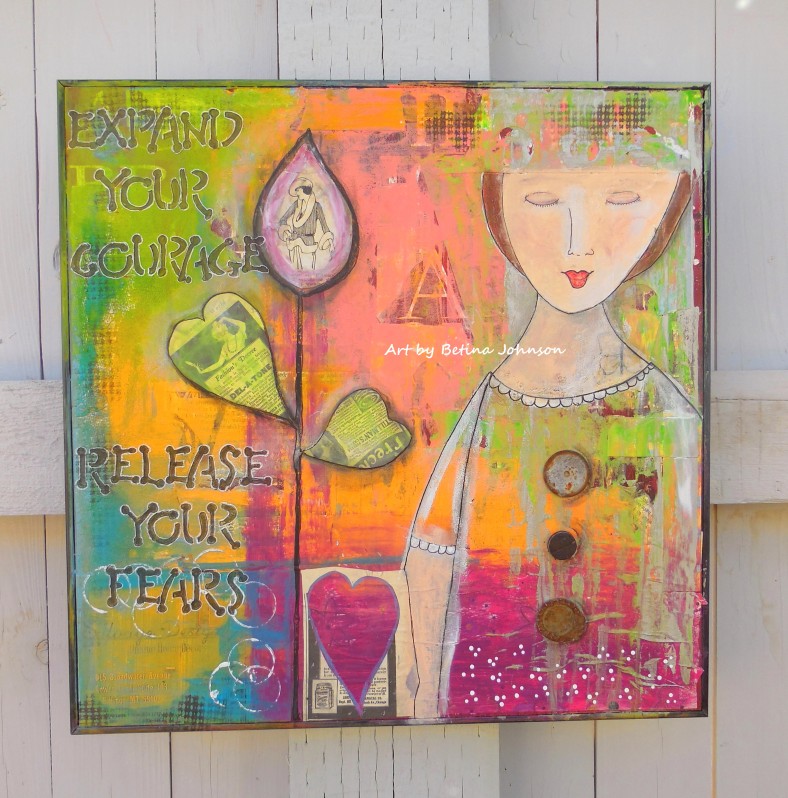 Just completed and delivered a commissioned piece from an amazing funky era… love all that 50’s style!!  For this piece, the poodle skirt was the important focus as well as the music.  I was young during that time but remember all that music on those old phonographs played over and over.  I, too, fell in love with the King and still listen to his music.  No one could sing a gospel song like Elvis Presley!  I loved creating this piece and when my friend opened it I saw the joy in her face and it made my heart sing…she loved it as well.  It cannot get any better than knowing your art is finding a joyful home and what you created for someone appreciated.  Thanks Linda!! 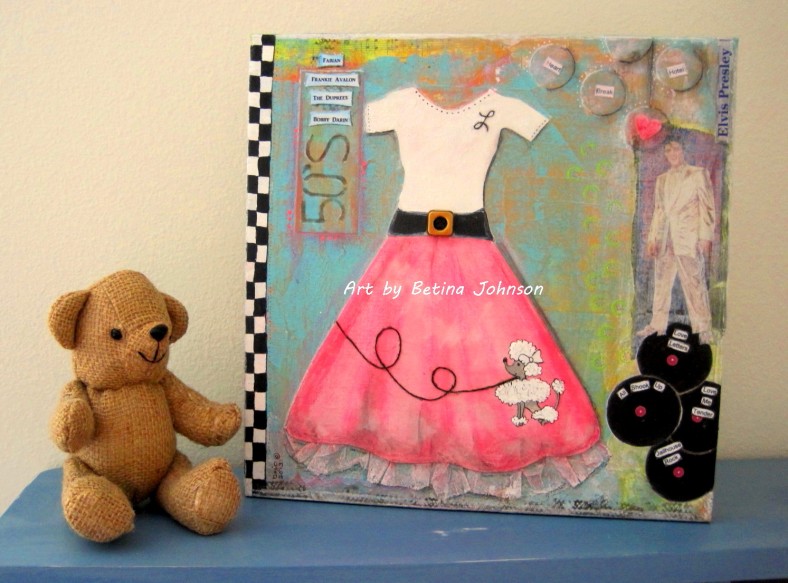 This piece is larger than I’ve worked on in the past.  I’m feeling a need to push myself towards a larger space to fill.  This piece is in the finishing stages but has a bit more detail to give it the appearance I try to create in my art.  My last post was of a house as well.  Wondering if this has anything to do with the fact that I’ve been stuck inside for the last couple weeks because of the heat!  Must be summer cabin fever!!

Thanks for visiting my blog everyone!  Have a great Friday and stay cool!

A new piece inspired by my recent effort to begin walking weekly with a friend.  It’s been an amazing experience to share our walks, our conversations and the beauty that surrounds us.  Last week we spied several different species of birds…so wonderful!  I’ve titled this piece: Walking Path.  Thank you for stopping by!